Nature’s Keys To The Universe

Nature’s Keys To The Universe 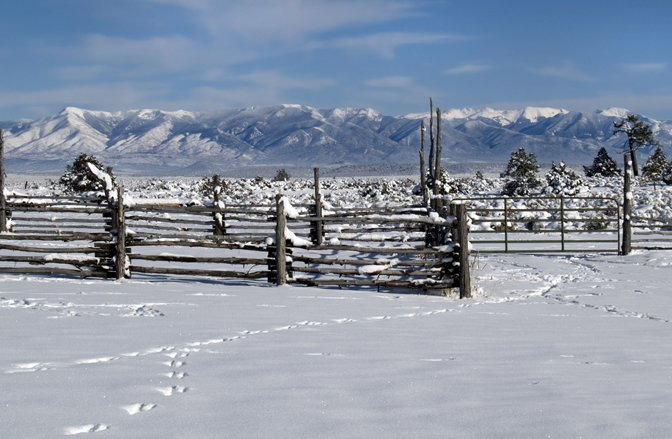 My first winter in northern New Mexico’s high desert happened to be one of the coldest ever entered in the record books. Even the elders of the nearby native pueblos said that no one remembered it having been so cold, for so long, as during the dry winters of the early 1990s.

While my scientific mind knew that cold air is heavier than warm air and tends to settle in the valleys at night, until that first winter I never really realized just how cold those nights could be. The first December evening that I walked outside my house to look at the stars and check the thermometer near the woodpile, I found out.  I quickly learned that high-desert valleys could create dangerous conditions where bare skin can freeze in minutes. After I tapped the mercury a couple of times to make sure the reading wasn’t stuck, I dashed back inside for a warmer coat. The temperature was 50 degrees below zero!

When the sun came up the next morning and temperatures rose into the mid-40s above zero, I drove into town. Everywhere I went the conversation was the same. People were talking about the record cold and what it had done to their livestock, water pipes, and crops the night before. One man at the local hardware store, who’d had to be on the job before the sun warmed the world, found that morning as he rolled out of his driveway that the rubber on his tires had become so brittle from the cold that they had actually cracked and broken. Later that night, the temperatures dropped again, and once more thermometers read nearly 50 degrees below zero.

While I was walking in the fields surrounding my home the next day, I noticed that the occasional anthills dotting the property seemed to be larger than normal—and not just a little larger: these were anthills that measured a foot and a half or more above the ground and could be seen for acres before I got to them! There were some that even towered above the sage plants and desert shrubs that grow wild in the valley.

I knew that for the mounds to be so large, the ants had to go really deep into the ground. I also knew that the deeper ant colonies built their tunnels into the earth, the warmer the temperatures of the ground surrounding them became. What I didn’t know was if there was a link between these facts and the record temperatures. In other words, had the ants somehow “known” that an extremely cold winter was on the way and built their homes accordingly?

The next winter, the weather patterns changed. While the December temperatures were still cold and well below the zero mark, they were not 50 degrees below. Throughout the autumn I had watched the anthills across the fields and noticed that they didn’t seem to be as big as the year before. Hmm, I thought, maybe the ants are telling us that this won’t be such a cold winter.  I soon discovered that what I’d seen in my fields is part of well-known lore among the native people and historical residents of the high deserts. It’s a pattern. And that pattern is part of a cycle. It’s as predictable and reliable as any high-tech forecasts from the computer models, but it comes even earlier than they do.

The pattern is clear: the higher the mounds, the deeper the ants have tunneled into the ground, and the colder the winter will be. By the time the trees begin to turn in the fall, if the ants go really deep, it means that I can either schedule my seminars in a part of the world where the temperatures are at least a little above zero at night . . . or stock up on some extra firewood. The point is that the anthills and the weather are patterns that can be recognized. Together, their cyclic patterns are part of even larger patterns of seasons. The patterns are consistent, and they appear like clockwork.

The more we learn about our relationship to nature and time, the clearer it is that patterns and the cycles of time are more than simply an interesting phenomenon of life. The cycles of time are life. In fact, it’s fair to say that for everything from the biology of DNA and the laws of physics to the history of our planet and the evolution of the universe, our world of matter follows very precise rules that allow things to “be” as they are.  While it may sound like the only time we escape the effect of cycles is at the end of life, even in death we appear to be part of a larger cycle. Almost universally, our most cherished spiritual traditions remind us that death is merely the end of one cycle and part of a greater one that mirrors the creation/destruction/birth/death theme of the universe itself.  With these ideas in mind, nature offers us two powerful keys that make it possible to predict repeating patterns in the cycles of time. Regardless of the scale, whether the cycles last for a nano- second or for tens of thousands of years, the keys work the same way.

Separately, each key stands on its own as a powerful tool to understanding everything from the secrets of atoms and the inner workings of solar systems to the cycles of personal success and betrayal. Combined, they offer an unprecedented insight into the language of time itself.